Social Media User Warns D-Black To Stay Away From Gyakie. A picture of D-Black and Gyakie working together in a studio has attracted comments from social media users including a particular fan who pleaded with the rapper to squash any intentions of signing the singer unto his record label.

According to him, Gyakie is already a star and as such does not need any grooming whatsoever from the Black Avenue boss.

Some critics are of the view that whoever D-Black signs unto his label, ‘Black Avenue Music’ somewhat remains an ‘underground’ artiste.

The likes of Nina Richie, Sefa, and many others have been signed under that particular label since 2018 yet still bears the ‘underground artiste’ tag.

2017 MTN Hitmaker winner, Freda Rhymz, became more popular and relevant in the showbiz circles after her exit from the label.

Also, many thought Wisa Gried’s career will experience a re-vamp after D-black paid his court fine and signed him but not much has been heard of the singer since.

Perhaps it is in this light that the social media user is asking that the rapper to stay very far from Gyakie.

“Make you no do your mind say you dey come sign am, We beg you. Our only superstar we got right now,” he commented beneath the picture published by popular Ghanaian blogger, GH Kwaku.

Clearly and gradually, Gyakie is taking the Ghanaian music industry by storm, breaking the charts and winning the hearts of music lovers in the country.

She rose to fame in 2020 following the release of her debut 5-track EP, titled “Seed”, which features her breakthrough song “Forever”.

From topping local charts with this particular song, Gyakie has made it to number 15 on ‘Billboard charts’ thereby competing with the likes of Cardi B among others.

Read the comment from the post below: Social Media User Warns D-Black To Stay Away From Gyakie. 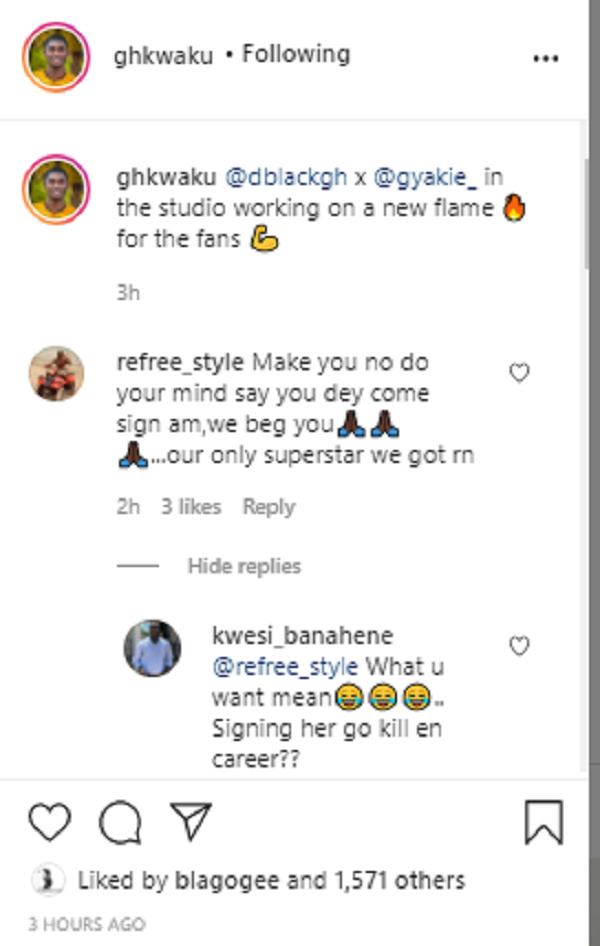