Bullgod is suing Shatta Wale for defamation after the musician threatened to expose his alleged secret involving the death of late artiste manager, Fennec Okyere.

Bullgod sues Shatta Wale for defamation
In a social media post on Wednesday, November 2, the ‘My Level’ hitmaker wrote, “Bull Dog, since you are bringing out secrets, you will tell Ghanaians what happen to Fenicks (sic) Murder!! And I am not joking about this time!!”

“I am ready to tell the court about what you told me about you and your men and how you planned that foolish act, get ready. This Akufo-Addo won’t give you a murderer (sic) chance to be on our streets!!! Watch how this ends!!! You can’t fight time!!!”

In the court documents filed at an Accra High Court, Bullgod’s lawyers indicated that these statements seek to suggest that he planned, effected or had a hand in Mr Okyere’s death. They added that Shatta Wale’s claims also meant “that the Plaintiff is a criminal gangster and a danger to society and ought to be in jail (rather than walk freely in the streets).”

Also, “that his (the Defendant’s) claims in the publication are factual, truthful, and must be taken seriously by the public and law enforcement authorities.” 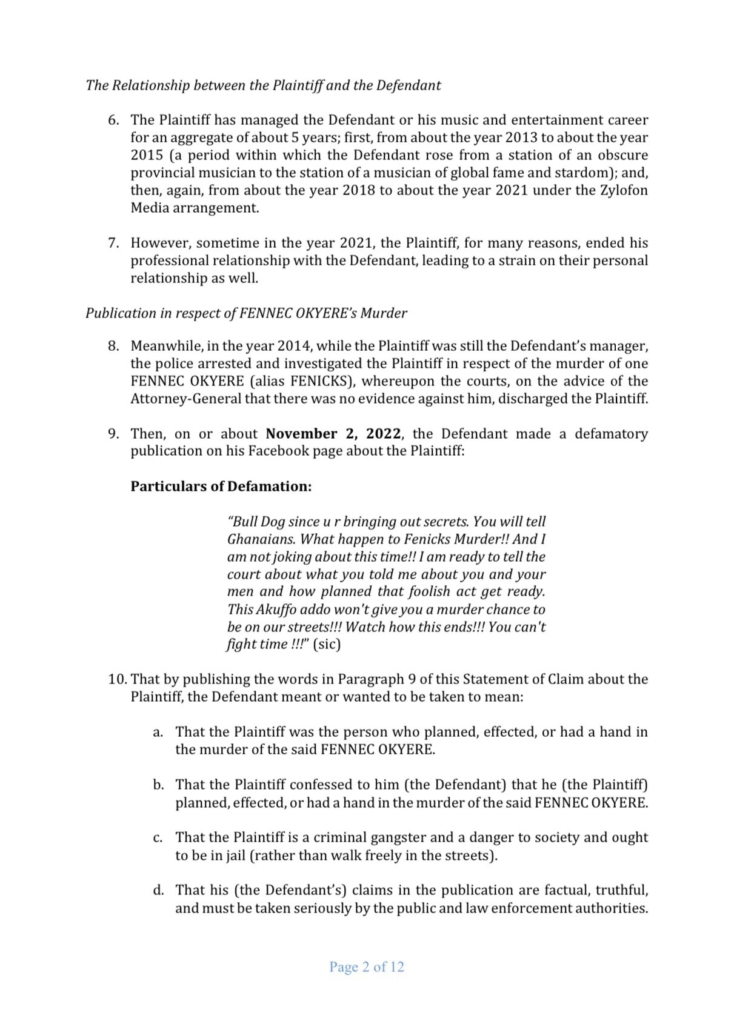 They indicated that these statements have triggered a re-investigation into the death of Mr Okyere by the police.

But, Bulldog’s team insist that these statements are false, malicious and only defames the artiste manager.

That’s not all, the lawyers cited other statements Shatta Wale has made which they believe to also be defamatory. 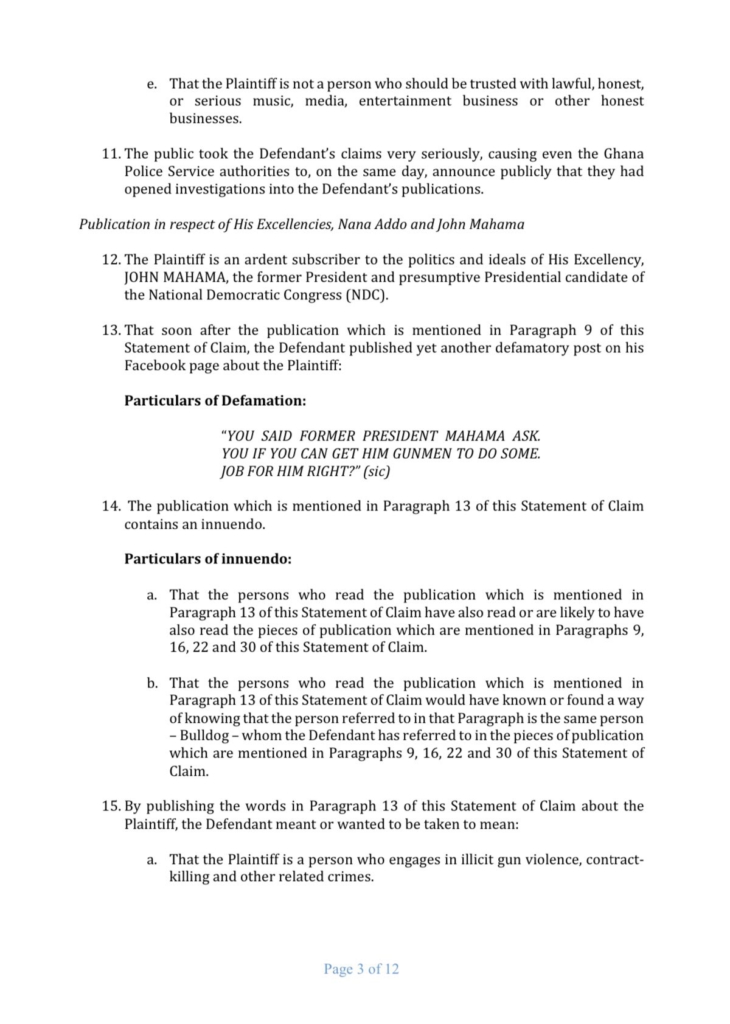 They include claims that Bulldog had allegedly said former President Mahama asked him to procure gun men for a supposed job and also women for him.

The lawyers noted that these statements implies that “the Plaintiff is a person who engages in illicit gun violence, contract killing and other related crimes,” and also “that the Plaintiff is in the trade of procuring, controlling, and arranging prostitutes in return for money and other material gains.” 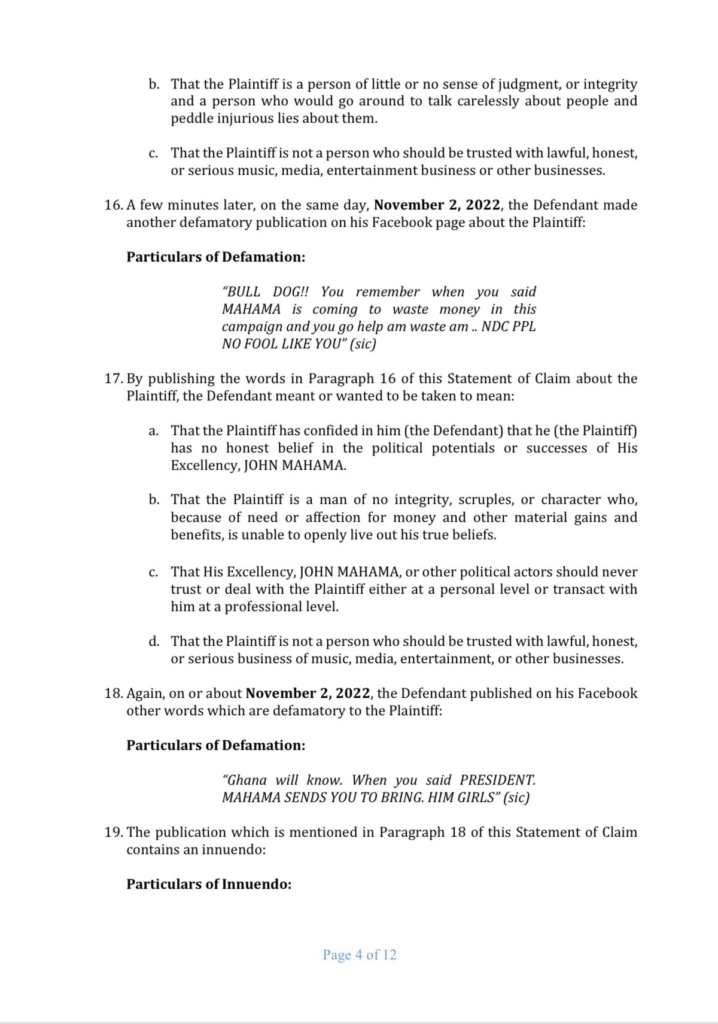 Thus, Bulldog is seeking a declaration from the court that these statements and others highlighted in the suit are defamatory and malicious.

He is also calling on the court to direct Shatta Wale to retract his allegations and apologies to him. 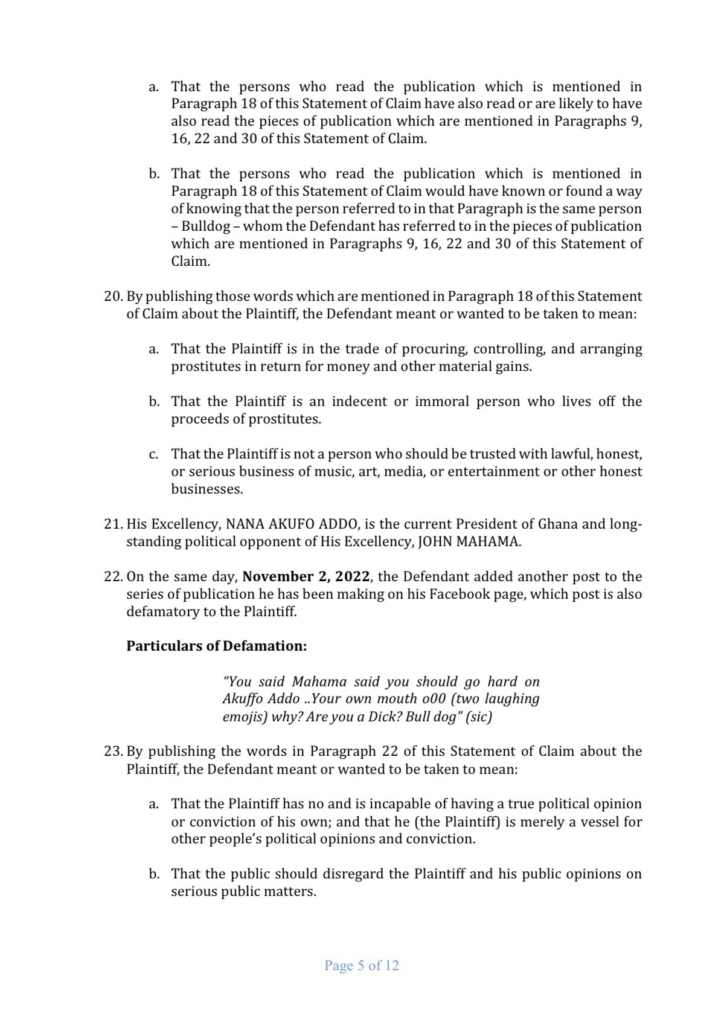 Bulldog is demanding that the ‘Ayoo’ hitmaker apologise “on all his social media pages or accounts, make a publication on seven consecutive days” adding that “such retraction and apology to be vetted and approved by the Plaintiff’s lawyers.”

He is also seeking a perpetual injunction that hinders Shatta Wale from publishing any defamatory comments about him. 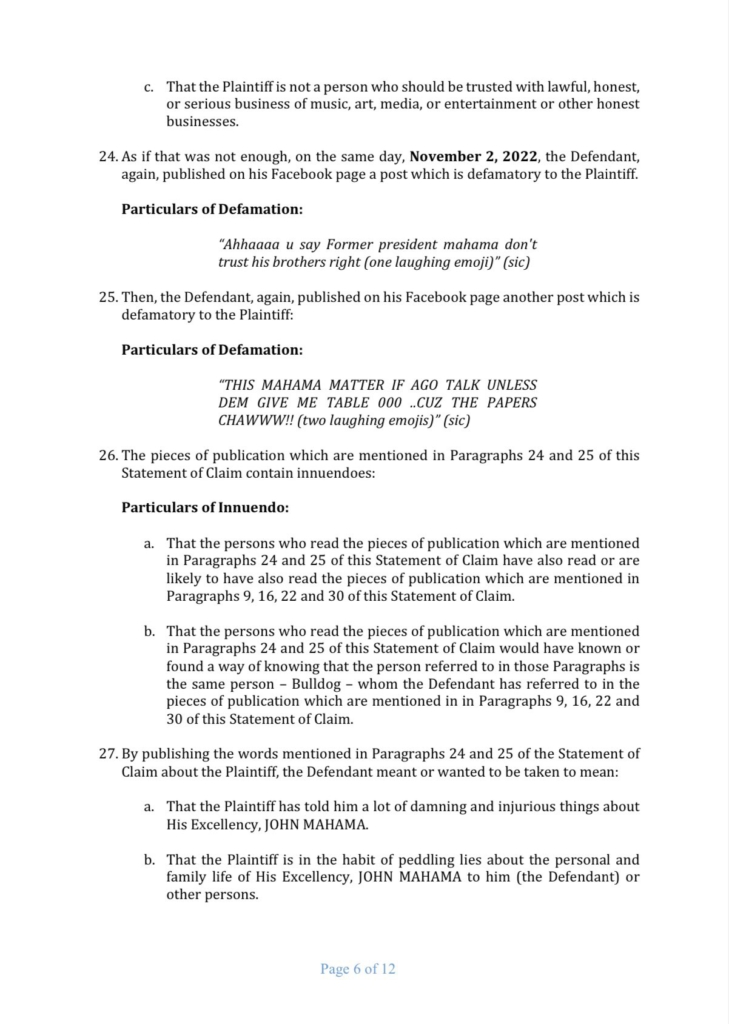 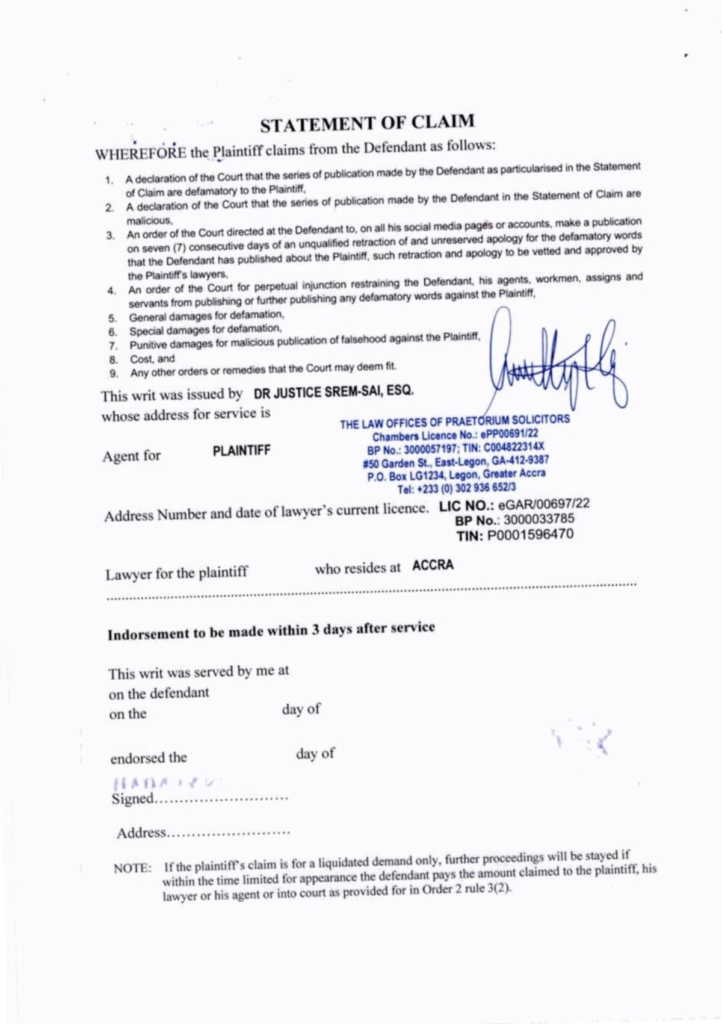 Background
This comes nearly a week after Shatta Wale threatened to reveal a secret Bulldog told him in relation to the death of the artiste manager.

The threat was in reaction to the leakage of the list of artistes featuring on the tracks for Shatta Wale’s upcoming album, ‘Gift of God’ (GOG) by Bulldog.

The ‘Ayoo’ hitmaker stated that he is ready to tell any court what Bulldog told him about the murder of Fennec Okyere.

This caught the attention of Kwaw Kese whose career Fennec Okyere managed before his passing in 2014.

He shared a screenshot of Shatta Wale’s post and called on the Police to get justice for his former manager.

The Police later released a statement noting that they were in touch with Shatta Wale and hoped to get relevant information to help find the culprit.

Fennec Okyere’s death
Fennec Okyere, who was the manager of Kwaw Kese, was murdered at his Manet Gardens residence on the Spintex Road, Accra on Thursday, March 13, 2014 by unknown assailants. He died at age 31.

He was arrested at Kokomlemle, a suburb of Accra, as a suspect in the death of Fennec Okyere.

This was because Bulldog who had regular beefs with Fennec Okyere, had supposedly threatened him in an interview on radio.

While on the Police charge sheet Bulldog was to face the charge of conspiracy to commit murder, his plea was not taken.

In 2017, the Bullhaus Entertainment CEO was freed from the charges in relation with the alleged murder, with then Attorney-General, Gloria Akuffo saying the state was no longer interested in prosecuting Bulldog over the alleged murder of Fennec Okyere.

This was contained in the A-G’s advice on the case docket. Kwaw Kese registered his unhappiness about the development.

“Even the prosecutors were not going to court. I believe our security system is very weak,” a very disappointed Kwaw Kese told Lexis Bill in an interview on Behind the Fame on Drive Time on Joy FM in 2018.

But, Bulldog has consistently maintained that he is innocent, thus had no hand in the passing of Fennec Okyere.

According to him, the jabs they threw at each other were aimed at promoting their artistes and also to remain relevant as managers.

In a 2022 interview on Hitz FM, Bulldog maintained his innocence adding that he never threatened Fennec Okyere, despite their disagreements.

Meanwhile, Shatta Wale is expected to respond to the suit eight days after he has been served.